Alcohol consumption by the mother is a leading cause of preventable birth defects in the fetus and is the only known cause of mental retardation that is completely preventable. Everything a mother drinks also goes to the fetus. Alcohol is broken down more slowly in the immature body of the fetus than in an adult’s body. This can cause the alcohol levels to remain high and stay in the baby’s body longer. In addition, the risk of miscarriage and stillbirth increases with alcohol consumption.Mothers who drink during their pregnancy increase their newborn’s risk of infection, a new study suggests, even after controlling for other risk factors — such as poverty, low infant birth weight and maternal smoking.”Excessive alcohol use, especially during the second trimester, increased the risk of newborn infection by more than three times relative to babies whose mothers reported not drinking alcohol in the second trimester,” researcher Theresa Gauthier, an assistant professor of pediatrics and attending neonatologist at Emory University, in Atlanta, said in a prepared statement. 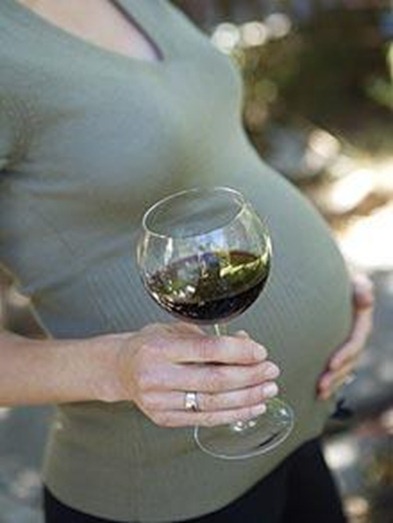 He study also found that smoking by women at any time before and during pregnancy increased the risk of newborn infection, and the Atlanta team found that many of the women who drank alcohol while pregnant also smoked. Because maternal smoking is known to raise a newborn’s infection risk, the combination of smoking and drinking “may synergistically affect the developing immune system,” Gauthier speculated. “However, our data suggest that maternal alcohol use increases the risk of newborn infections, even if she did not smoke.” Alcohol abuse is well known to increase the risk of infections in adults.

Newborn infants whose mothers reported alcohol use, excessive drinking or smoking during pregnancy were more likely to be diagnosed with an infection than those whose mothers did not.”Despite the well-publicized risks, there continues to be a significant number of women who drink during pregnancy,” said Theresa Gauthier, assistant professor of pediatrics and attending neonatologist at Emory University, and corresponding author for the study. “Some studies say up to 35 percent of premature births involve women who drink during pregnancy. Furthermore, about 50 percent of women drink prior to realizing they are pregnant.” “The population that is in most danger of alcohol and smoking effects on the fetus are women with a low income who are poorly educated,” said Thomas Jerrells, professor of pathology and microbiology at the University of Nebraska. “Public-information campaigns are either not understood or ignored. It is also likely that many of these women do not receive the prenatal care that would be appropriate and may only see a doctor when the baby is delivered. This is compounded by the well-known underestimation of alcohol consumption by individuals in studies of alcohol effects.” “Alcohol abuse is well known to increase the risk of infections in adults,” added Gauthier. “The major focus of the damaging effects of fetal alcohol exposure, however, has been on the effects of alcohol to the developing brain. Since the entire developing fetus is exposed to alcohol in utero, other organ systems, including the immune system and the lungs, are similarly exposed to alcohol but the risks to these systems have not been similarly identified. Therefore, we investigated the risk of infection using an existing database which identified and examined alcohol-exposed pregnancies.”
Researchers examined data gathered from 872 women who delivered single infants at 36 to 42 weeks of gestation at two large delivery hospitals in Atlanta, Georgia between February 1993 and December 1994. Following delivery, mothers were asked about alcohol and tobacco use in the three months prior to conception, and during the first, second and third trimester of pregnancy. Information, including gender, gestational age, and size relative to gestational age, was also collected about their infants.
“Of the 872 term infants, 5.8 percent or 51 infants had newborn infections diagnosed after delivery,” said Gauthier. “Mothers who reported alcohol use, excessive drinking or smoking in pregnancy were more likely to have a newborn diagnosed with an infection than were mothers who reported abstaining from alcohol or cigarettes. Once we controlled for low maternal income, smoking, and for the baby being smaller than it should be, excessive alcohol use, especially during the second trimester, increased the risk of newborn infection by more than three times relative to babies whose mothers reported not drinking alcohol in the second trimester.”
However, she added, although the greatest risk of infection occurred with excessive drinking during the second trimester, further research is needed to determine if drinking at this particular time is more damaging than at others.
Maternal smoking at any time point before and during pregnancy also increased the risk of infection.
“Furthermore, there was a significant association between maternal smoking and drinking,” said Gauthier. “In other words, many of the women who were drinking alcohol during pregnancy were also smoking as well. Previous studies have suggested an increased risk of infection in the newborn exposed to smoking, as well as infectious carriage of organisms in pregnant women who smoke. Therefore, the concurrent abuse of both alcohol and smoking in the mother may synergistic-ally affect the developing immune system. However, our data suggest that maternal alcohol use increases the risk of newborn infections even if she did not smoke. More studies are needed to identify the mechanisms behind these potential risks, and if the combination of smoking and alcohol synergistic-ally increases the risk.”Both Gauthier and Jerrells hope that these findings will motivate further research on the effects of maternal alcohol consumption on developing organ systems in both the term and premature newborn, as well as the combined effects of alcohol consumption and smoking on the newborn.Infection Diagnosed Soon After Delivery :- Gauthier’s team studied 872 Atlanta-area mothers and their babies. Mothers were asked about their alcohol and tobacco use just prior to conception and during their pregnancy. Fifty-one of the infants  just under 6 percent — had an infection diagnosed soon after delivery. “Mothers who reported alcohol use, excessive drinking or smoking in pregnancy were more likely to have a newborn diagnosed with an infection than were mothers who reported abstaining from alcohol or cigarettes,” Gauthier noted.
Share