How to Stay Safe from Flu and Colds at Walks

I spent the weekend hosting a walking event for 2000 walkers from around the world. My chief assistants both have a very nasty cold, and one had to take Sunday off she is so sick. How could I protect myself and the public? 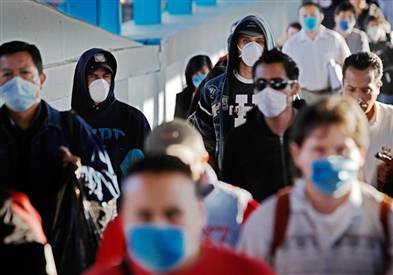 Hand washing and Sanitizing
Most cold and flu viruses are spread by direct contact. Someone who has the flu sneezes onto their hand, and then touches the telephone, the keyboard, a kitchen glass. The germs can live for hours – in some cases weeks – only to be picked up by the next person who touches the same object. So wash your hands often. If no sink is available, rub your hands together very hard for a minute or so. That also helps break up most of the cold germs. For the common cold and flu, using hand sanitizer and hand washing frequently can help prevent spread. This will help protect you from the hand-to-hand spread .For spread through the air, it is just best not to be in the same room or vehicle with the person or to wear a face mask. Neither of these was an option for me this weekend. Don’t be afraid to bring your own bottle of hand sanitizer along and “hit the bottle” frequently.

Walk Outside – Not the Gym
Walking and other moderate exercise has been shown by studies to be correlated with catching fewer colds. But using the treadmill and other equipment at the gym will expose you to what other people are incubating. You can sanitize the treadmill grips and display before getting on, but you are still exposed to others coughing and sneezing inside the gym. The cold and flu viruses love the indoors where a cough or sneeze keeps them concentrated in the air. Outside, you are at far less risk. Get out and explore greenway paths and park trails in your local area, where the sneezers and coughers will be far away at home. You will be assisting your immune system and avoiding contact with those who won’t stay home when they are sick. 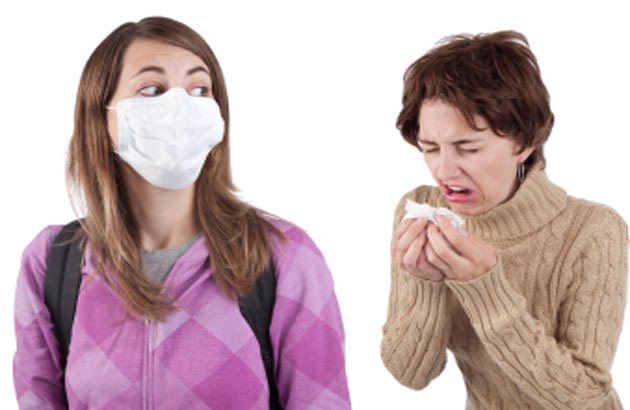 Should You Walk When You are Sick?
The rule of thumb is that if all of your symptoms are above the neck, you should continue to enjoy moderate intensity exercise such as walking. If you have chest symptoms or a fever, you are excused. Some light stretching is always good. Walking When You are Sick

Since there are no known cures for colds or the flu, prevention should be your goal. A proactive approach to warding off colds and flu is apt to make your whole life healthier. The most effective way to prevent flu, frankly, is to get a flu shot. It may not be natural, but it works better than anything else. But there are other strategies you can employ as well.

Don’t Cover Your Sneezes and Coughs With Your Hands

Because germs and viruses cling to your bare hands, muffling coughs and sneezes with your hands results in passing along your germs to others. When you feel a sneeze or cough coming, use a tissue, then throw it away immediately. If you don’t have a tissue, turn your head away from people near you and cough into the air.

Cold and flu viruses enter your body through the eyes, nose, or mouth. Touching their faces is the major way people catch colds.

Water flushes your system, washing out the poisons as it rehydrates you. A typical, healthy adult needs eight 8-ounce glasses of fluids each day. How can you tell if you’re getting enough liquid? If the color of your urine runs close to clear, you’re getting enough. If it’s deep yellow, you need more fluids.

Researchers aren’t clear about the exact role saunas play in prevention, but one 1989 German study found that people who steamed twice a week got half as many colds as those who didn’t. One theory: When you take a sauna you inhale air hotter than 80 degrees, a temperature too hot for cold and flu viruses to survive.

A regular dose of fresh air is important, especially in cold weather when central heating dries you out and makes your body more vulnerable to cold and flu viruses. Also, during cold weather more people stay indoors, which means more germs are circulating in crowded, dry rooms.

Aerobic exercise speeds up the heart to pump larger quantities of blood, makes you breathe faster to help transfer oxygen from your lungs to your blood, and makes you sweat once your body heats up. These exercises help increase the body’s natural virus-killing cells.

“Phyto” means plants, and the natural chemicals in plants give the vitamins in food a supercharged boost. So put away the vitamin pill, and eat dark green, red, and yellow vegetables and fruits.

Some studies have shown that eating a daily cup of low-fat yogurt can reduce your susceptibility to colds by 25 percent. Researchers think the beneficial bacteria in yogurt may stimulate production of immune system substances that fight disease.

Statistics show that heavy smokers get more severe colds and more frequent ones.

Even being around smoke profoundly zaps the immune system. Smoke dries out your nasal passages and paralyzes cilia, the delicate hairs that line the mucous membranes in your nose and lungs that sweep cold and flu viruses out of the nasal passages. Experts contend that one cigarette can paralyze cilia for as long as 30 to 40 minutes.

Heavy alcohol use destroys the liver, the body’s primary filtering system, which means that germs of all kinds won’t leave your body as fast. The result is, heavier drinkers are more prone to initial infections as well as secondary complications. Alcohol also dehydrates the body — it actually takes more fluids from your system than it puts in.

If you can teach yourself to relax, you can activate your immune system on demand. There’s evidence that when you put your relaxation skills into action, your interleukins — leaders in the immune system response against cold and flu viruses — increase in the bloodstream. Train yourself to picture an image you find pleasant or calming. Do this 30 minutes a day for several months. Keep in mind, relaxation is a learnable skill, but it is not doing nothing. People who try to relax, but are in fact bored, show no changes in blood chemicals.

The finding showed that the group who got at least moderate exercise on most days averaged one cold, while the less active group reported over 4 colds in the year. The most obvious benefit to exercise appeared in the fall when nearly 40 percent of the colds were reported. The active group showed a risk reduction of 32 percent during the prime season for colds.

Other studies have also found that exercise may have a positive effect when it comes to recovering from colds. David Nieman of Appalachian State University found that women who walked regularly and still got colds had symptoms that lasted less than five days, while similar women who did not walk had colds that lasted seven days.

Researchers speculate that being physically active may stimulate immune cells that target cold infections. This stimulation appears to last only a few hours, but having this stimulation consistently for days and weeks may lower the overall risk of being susceptible to colds.

There is also evidence that too much intense exercise can lower the immune response. The classic case is of a marathon runner who has a higher risk of a cold for several days after the event. Overtraining can also cause an athlete to develop a greater risk of catching colds bugs.

Based upon the various evidence available, it appears as though there is still a good argument to be made for moderation in all things. Even exercise.