Intense interval training means working very hard for a few minutes, with rest periods in between sets.People who complain they have no time to exercise may soon need another excuse.Some experts say intense exercise sessions could help people squeeze an entire week’s workout into less than an hour. Intense exercise regimens, or interval training, was originally developed for Olympic athletes and thought to be too strenuous for normal people.

LONDON – People who complain they have no time to exercise may soon need another excuse.Some experts say intense exercise sessions could help people squeeze an entire week’s workout into less than an hour. Intense exercise regimens, or interval training, was originally developed for Olympic athletes and thought to be too strenuous for normal people. 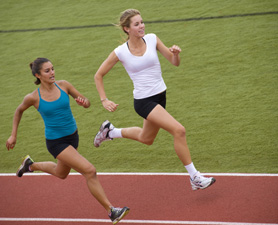 But in recent years, studies in older people and those with health problems suggest many more people might be able to handle it. If true, that could revolutionize how officials advise people to exercise — and save millions of people hours in the gym every week. It is also a smarter way to exercise, experts say.

“High-intensity interval training is twice as effective as normal exercise,” said Jan Helgerud, an exercise expert at the Norwegian University of Science and Technology. “This is like finding a new pill that works twice as well … we should immediately throw out the old way of exercising.”Intense interval training means working very hard for a few minutes, with rest periods in between sets. Experts have mostly tested people running or biking, but other sports like rowing or swimming should also work.

Helgerud recommends people try four sessions lasting four minutes each, with three minutes of recovery time in between. Unless you’re an elite athlete, it shouldn’t be an all-out effort.You should be a little out of breath, but you shouldn’t have the obvious feeling of exhaustion,” Helgerud said.

In Britain and the U.S., officials recommend that people get about 2 1/2 hours each week of moderate exercise. Those guidelines target a mostly sedentary population and are intended to help with weight control and heart health, not boosting fitness levels, increasing strength or endurance. 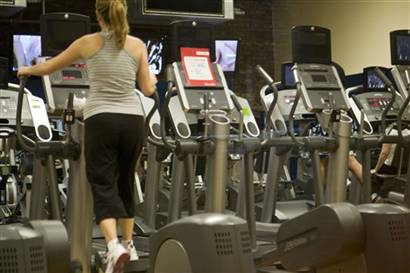 Some experts have cautioned that ordinary people shouldn’t substitute their regular exercise routine for intense training.”There isn’t enough evidence to say people should do one or the other,” said Gary O’Donovan, a sports and exercise expert at the University of Exeter. “Any bout of exercise has the potential to improve your blood pressure or lower your cholesterol, and it doesn’t necessarily have to be intense.”

Still, O’Donovan said more intense exercise would probably produce better benefits.Helgerud says the time people spend in the gym could be slashed dramatically if they did interval training instead. He said officials have been too afraid of recommending intense training for fear it would be too much for some people.”I’m much more afraid of people not exercising at all,” he said. “Inactivity is what’s killing us.”When compared to people on a normal exercise routine, like jogging, research has shown those doing interval training can double their endurance, improve their oxygen use and strength by more than 10 percent and their speed by at least 5 percent. Even studies in the elderly and in heart patients found they had better oxygen use and fitness after doing interval training.Still, experts advise people to consult a doctor before starting any fitness program.For Adamson Nicholls, a 36-year-old Londoner and martial arts enthusiast, interval training is a way to boost his endurance so he can outlast sparring opponents. “It’s a shortcut to explosive fitness,” he said, adding the training resulted in snappier and heavier punches.”A lot of the from exercise are due to a stress response,” said Stephen Bailey, a sports sciences expert at the University of Exeter. “If you disturb your muscles, there’s an imbalance created and your body will start signaling pathways that result in adjustments.”

Bailey said intense bursts of exercise help the body to convert one type of muscle fiber into another type that uses oxygen more efficiently and is capable of exercising a lot longer. Even though interval training only takes a few minutes, its effects last for hours.

“You’ve exercised at such a high intensity that you’re going to create a massive disturbance in your muscles,” Bailey said.

That creates a higher metabolism for several hours afterward, which the body will bring down by burning fat and carbohydrates