Without doubt, the first thing is your self belief and determination to quit this dangerous habit. Now, self belief is not something that one can just think of and gain it instantly. You have to work for acquiring self belief, consistently. Precisely stated, you have to train your mind to accept various reasons to stop smoking. Once, you are able to deeply ponder on the harmful smoking effects, you will be able to resist the temptation and urge to smoke.Make it a habit to write your experiences in a journal. This will motivate you and help you not to lose focus from your objectives. You have to be ready to face challenges as there are certain quit smoking side effects. Initially, there may be body aches and anxiety after you quit smoking, hence, you have to mentally prepare for everything. 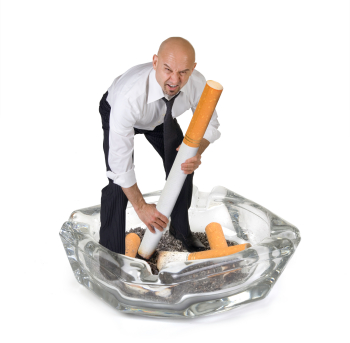 Do not depend on aids. Be a complete man. Do not depend on stretchers. Aids are no less than stretchers.  Avoid general smoking aids like patches and nasal sprays. Avoid chewing gum also. It is also a smoking aid. Nicotine patches are designed to deliver small quantities of nicotine in your bloodstream. This method is nothing but a satisfaction of nicotine craving. The only fact is that there is absence of dangerous tars and poisonous gases which are found in the cigarettes. This is a convenient method to reduce cravings. Unfortunately there is a slight twist in the use of NRT based aids. The user of NRT based aids may become addicted to the aid, itself

This method is moderately effective in giving up smoking. The smoker, willingly subjects him or herself to a hypnosis session. The therapist by the method of auto suggestion makes the smoker get the will power to quit smoking.

There are a number of alternate therapies which help smokers give up cigarettes. These are very important and useful therapies and help the smoker to control Nicotine craving. Examples of such therapies are Aromatherapy, acupuncture, acupressure and meditation.

Counseling
You need to boost will power many a times. You definitely need counseling under such conditions.  Counseling is extremely important for behavioral support. It is important that you have one to one counseling sessions. You also need to attend group meeting of experts and like minded people.  Some private, government and charitable organizations support the idea of counseling.

There are certain medications that are available only on a doctor’s prescription. These are drugs which are either sedatives or relaxants and help in controlling and calming the nerves. Doctors can prescribe such drugs either on an SOS basis or on a regular basis.

Generally, it is understood that quitting marijuana or weeds is the same as quitting cigarettes. However, the fact is that quitting weeds doesn’t show much physical withdrawal symptoms as does cigarettes. The effects of marijuana addiction are more psychological. A person becomes psychologically addicted to weeds and in more intensity than he is addicted to cigarettes. Hence, the best way to stop smoking weeds is not to just take medications but you have to introspect within yourself. Since you’ve to fight the psychological addiction, you require more activities and habits that can take your mind off from weeds. Developing creative hobbies, practicing meditation and healthy exercises are some of the best ways to quit marijuana. After some counseling, you can chalk out a lifestyle that will gradually help you to quit abuse of such drugs.