People who suffer cardiac arrest – in which the heart stops beating – were less likely to die in subsequent years when bystanders performed cardiopulmonary resuscitation using chest compressions only, a new study found.

That builds on previous research that found no short-term survival differences in adult victims given compression-only CPR instead of the standard kind, which includes mouth-to-mouth resuscitation. 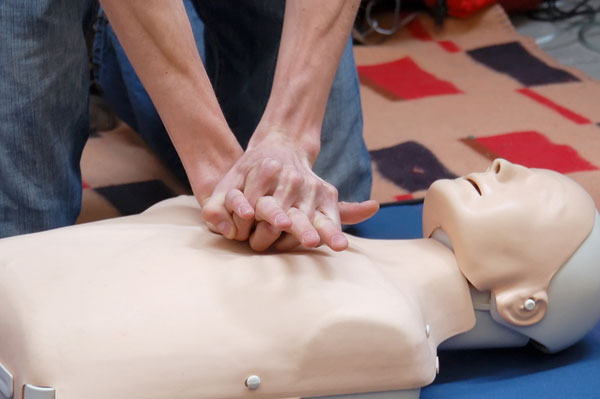 And it supports an American Heart Association recommendation that the simpler form of CPR is appropriate for bystanders, who may feel so intimidated by the prospect of combining chest compressions with rescue breathing that they give no aid at all.

This study shows “we were on the right track in 2008,” said Dr. Roger White of the Mayo Clinic, who was on the advisory group that wrote the AHA’s statement.

The recommendations don’t apply to CPR performed in the hospital, nor in the community by medical personnel or people who are proficient in rescue breathing. They also apply only to adult, not pediatric, victims.

Some 383,000 people in the U.S. suffer cardiac arrests every year, and only about 10 percent survive.

The study looked at data from two randomized trials that were published in the New England Journal of Medicine in 2010 and covered more than 3,200 adults whose cardiac arrests were likely due to heart problems rather than trauma, suffocating or drowning. Dispatchers instructed bystanders via phone to use either the standard or compression-only form of CPR.

The new study’s authors, who were from Seattle, France and Sweden, were able to follow up on longer-term outcomes for 78 percent of those participants.

The one-year survival rate was about 12 percent for chest compression alone and about 10 percent for compression plus breathing, said Dr. Florence Dumas, an author of the study, in an email to Reuters Health. After adjusting for different factors, mortality in the compression-only group was 9 percent lower than in the standard CPR group. The survival benefit persisted over five years, according to findings published in the journal Circulation.

In 2008 the AHA said compression-only CPR was an option for bystanders who aren’t trained or who aren’t confident in their ability to perform the compressions combined with rescue breathing.

Some people have worried that collapsed victims of non-cardiac events such as drug overdoses or a blood clot in the lungs might not get the oxygen they need with the compression-only approach, he said.

But the study authors wrote that, “importantly, we did not observe evidence of harm among those for whom oxygenation and ventilation might in theory be more important” such as non-cardiac causes or an unwitnessed cardiac arrest.

There is likely some oxygen remaining in the blood when a victim’s heart has stopped for a short period of time, and the compression-only technique can distribute it to vital organs. If a person has been down for a longer or unknown period of time, it’s more likely that they’ll need fresh oxygen through rescue breathing, said White, an anesthesiologist and cardiac care specialist who was not involved in the new study.

One limitation of the study was that it tracked survival only; it couldn’t assess patients’ level of function or quality of life. In addition, the original trials the study drew from weren’t designed to track long-term outcomes. (Reuters)