Colic (also known as infantile colic) is a condition in which an otherwise healthy baby cries or displays symptoms of distress (cramping, moaning, etc) frequently and for extended periods, 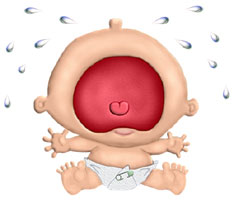 without any discernible reason. The condition typically appears within the first month of life and often disappears rather suddenly, before the baby is three to four months old, but can last up to 12 months of life. One study concludes that the chances of having colic is lower in breastfed babies.

The crying often increases during a specific period of the day, particularly the early evening. Symptoms may worsen soon after feeding, especially in babies that do not belch easily.

The strict medical definition of colic is a condition of a healthy baby in which it shows periods of intense, unexplained fussing/crying lasting more than 3 hours a day, more than 3 days a week for more than 3 weeks. However, many doctors consider that definition, first described by Morris Wessel, to be overly narrow and would consider babies with sudden, severe, unexplained crying lasting less than 3 hours/day as having “colic” (so-called “non-Wessel’s” colic). In reality, this extreme version of colic is more likely to be the final stage of a condition that has worsened for a few weeks.

At the outset, let me reassure you that you are not alone in your search for what to do about colic in your baby. Baby colic is a common problem which many health professionals like myself deal with on a regular basis. Although a totally harmless condition, a baby with colic causes considerable anxiety (understandably) to its parents and consequently repeated visits to a doctor to look for colic remedies.

Sudden, inconsolable crying or screaming in a baby on a repeated basis. This can happen daily in many babies and could happen more than once a day in some.

What causes colic in babies?

Irrespective of what hypotheses exist out there, no one knows for sure the exact causes for colic in babies. With a lack of sound evidence it is unwise to lean towards any of the proposed hypothesis. How do you deal with infant colic?

FIRST and FOREMOST, in my own opinion, every baby with inconsolable crying needs an assessment and opinion from a suitable doctor. Only after any serious problems have been clinically ruled-out, should one assume a diagnosis of ‘3-month colic’ in your baby. After checking the baby over, I invariably also ask for a urine check to rule out an infection.

IMPORTANTLY, parents, especially mothers need to know that they cannot be expected to deal with their screaming baby on their own. Please try to enlist help from your spouse, other family members or even friends for that matter. Taking a break is important as long as you know your baby is not going to suffer harm from the colic. As yet, there isn’t much evidence to indicate also that the baby is in any pain whatsoever during these episodes of colic.

Avoid Over stimulating the baby- i.e. picking up the baby and walking around or earnestly trying to calm the baby down. As difficult as it might sound, gentle soothing talk and touch seems to work better according to some experts.

Some parents swear by colic-drops and gripe water although medical evidence supporting their efficacy is weak. Please discuss this with your own doctor.

Playing soothing baby music is thought to be beneficial to babies. The calming, relaxing and sleep-inducing effects of pleasant music is a widely accepted convention. Music for babies has an increasing demand in the recent years which is probably a testament to its usefulness.

If your baby is bottle-fed, you may want to discuss with your doctor about switching to a “HYPOALLERGENIC” milk formula. Every doctor comes across babies with “colic” whose “Cow’s Milk Protein Allergy” is unmasked following an empiric change of milk to a Hypoallergenic formula. Similarly, I have encountered babies whose symptoms appeared to resolve/improve following a trial of treatment directed towards “Gastro-esophageal Reflux” problems. Please do discuss this with your doctor during your appointment.

A school of thought also exists that mother’s diet plays a part in causation of colic in babies. So if you are Breastfeeding, you could keep a close eye on your diet to see there’s a link between anything you consume and your baby’s colic.