I often stay awake till late night as my office timings are bit odd. And obviously that unconventional schedule has disturbed my eating habits also. I would go to the kitchen in the middle of the night and would look for something to eat; anything from snacks to Pizza to a Brownie or doughnut. But I am frightened after reading this study that states that midnight snacks may stick to the teeth for longer, experts suspect.

Eating food in the middle of the night can seriously damage your teeth, Danish experts 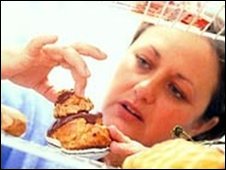 Researchers examined medical records of 2,217 Danes and found midnight snacking ups the risk of tooth loss, regardless of the type of food eaten.

The University of Copenhagen team blamed changes in saliva flow – it tends to dry up at night.

Enough saliva is important to remove food debris from the mouth, they explain in Eating Behaviours journal.

Working with colleagues from the US, the team at Copenhagen University examined the medical records of 2,217 Danes already enrolled in a medical study.

Of these 173, or 8%, could be classed as nocturnal eaters – meaning they consumed a quarter or more of their daily calories after dinner or would wake up in the middle of the night at least twice a week for a little moonlight snack.

When the researchers tracked what happened to all of the study participants over a period of six years, a significant finding emerged.

The nocturnal eaters ended up losing more teeth, even after accounting for other factors such as age, smoking and sugar/carbohydrate consumption.

While dentists may not be able to stop their patients feasting in the middle of the night, Dr Jennifer Lundgren and colleagues say they should make them aware of the associated risks.

“Practitioners should be aware of the oral health implications of nocturnal eating, increase screening and oral health education efforts among nocturnal eaters and make treatment referrals when appropriate,” they say.

Professor Damien Walmsley, scientific adviser to the British Dental Association, said: “Eating at night, when the mouth is driest and any food remains in the mouth longer, accentuates the impact of consuming sugary and acidic food and drinks.

“To minimise damage, it is important to brush teeth twice a day with fluoride toothpaste, with one of those brushes coming immediately before bedtime.

“Where possible, consume only water for at least an hour before the final brush of the day.”

I have promised to myself that I’ll resist the temptation to eat late night. What are your thoughts? Would you mind changing your eating habits?