If you want to lose weight, experts say you need to get enough sleep. Specifically, researchers have reported that women who sleep 5 hours or less per night generally weigh more than women who sleep 7 hours per night. These findings, presented at the 2006 American Thoracic Society International Conference, showed that women who slept 5 hours per night were 32% more likely to experience major weight gain (an increase of 33 pounds or more) and 15% more likely to become obese over the course of the 16-year study, compared to those who slept 7 hours a night. 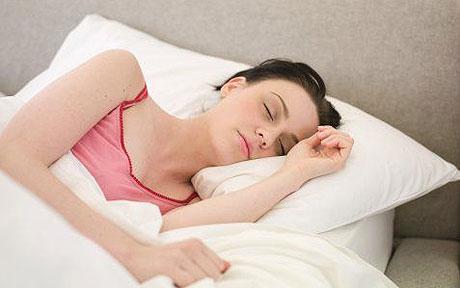 Those women who slept 6 hours per night were still 12% more likely to experience major weight gain, and 6% more likely to become obese, compared to women who slept 7 hours a night. This is the largest study to track the effects of sleep habits on weight gain over time; it included nearly 70,000 middle-aged women. The women were first monitored in 1986, and they reported their weight every 2 years for 16 years. At the start of the study, the women who slept 5 hours or less per night weighed an average of 5.4 pounds more than those sleeping 7 hours. They also gained an additional 1.6 pounds more over the next 10 years. While that doesn’t sound like a significant amount, it adds up. That’s 16 pounds in 10 years, and 32 pounds over a 20-year period. “That’s an average amount — some women gained much more than that,” says lead researcher Sanjay Patel, M.D., Assistant Professor of Medicine at Case Western Reserve University in Cleveland, OH. “Even a small difference in weight can increase a person’s risk of health problems, such as diabetes and hypertension.”

The researchers looked at exercise habits to determine if they could account, in part, for the findings. But they didn’t discover any differences in exercise levels or physical activity that would explain why the women who slept less weighed more.Were the women who were getting less sleep also eating more?The answer was no. In fact, the opposite was true.”Prior studies have shown that after just a few days of sleep restriction, the hormones that control appetite cause people to become hungrier, so we thought that women who slept less might eat more,” Patel says. “But, in fact, they ate less. That suggests that appetite and diet are not accounting for the weight gain in women who sleep less.”

The study participants did not identify the specific factors that contribute to weight gain in women who had less sleep.

standard advice for those wanting to lose some fat: eat less, exercise more or do some combination of the two. A small but intriguing new study suggests people might also want to make sure they’re getting enough sleep.

why do I think that sleeping affects weight loss? Here are a few reasons

I know that we are all supposed to get 8 hours sleep but some people really do need less. I find, as well as many others, that a sleep deficit is just faking yourself out. If you try to sleep 6 hours a night all week thinking that you will catch up on the weekend then you are really faking yourself out. Only you know how much sleep you really need.