Cucumber Extract Will Give Your Skin a Natural Biochemical Makeover … 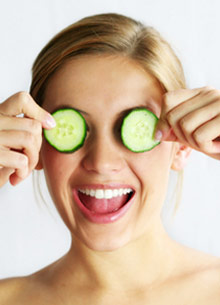 When the cucumber became important as a health food in the eighteenth century, it did not take long for people to forget those medical properties which had been well-known first of all to the Greeks and Romans and then later to the Arab physicians.Today we see the cucumber as a provider of a very healthy juice beneficial for its properties as an increaser of the flow of urine and as a complement to the effects of celery and carrot juice for rheumatic conditions, while at the same time being a soothing skin lotion. 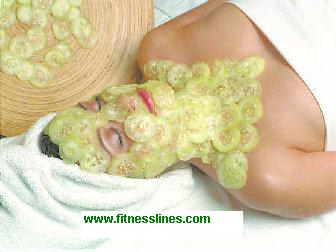 Other health benefits of cucumber is derived from the fact that it is very low in calories, about 4 per ounce (54KJ per 100g) being an average figure. Very high potassium contents have been claimed for the plant which from the most up-to-date analyses available would seem to be an exaggeration. The vitamin content is also generally to be found between low and average for the edible vegetable. 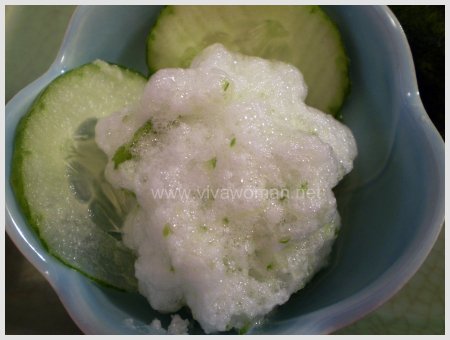 The egg white definitely tautened my skin and my face felt wonderfully soft afterwards. The pores were also much smaller, but it was only temporary. But like I mentioned, be careful that this mask will draw out quite a bit of impurities and cause some zits. You may also like to cut up two thin slices and placed them on your eyes to reduce puffiness while you’re having the mask on.

Leave on for 10 to 15 minutes before rinsing off
I have been using the cucumber juice on my face twice a day after washing. What I did was to apply some juice on my dry face, leave it on for about 10 to 15 minutes before rinsing off. Over the weekend, I also tried this cucumber anti-blemish mask which I picked from The Ultimate Natural Beauty Book by Jo Fairley but I skipped the rosemary essential oil though. It’s a very fun mask to put on but be warned; this mask can draw out quite a bit of impurities and you may end up with some small zits like what I have now on my forehead.

Use organic cucumber whenever you can
If you can, use organic cucumber. It doesn’t cost that much especially since you only need to use a little of the juice extract. One cucumber can last me about two weeks actually; including using it once for the anti-blemish mask and cutting up thin slices to reduce puffiness on my eyes a couple of times. And you don’t need a blender to extract the juice. Because a small grater can do the job wonderfully too.