Still got wobbly arms despite the fact that you’ve done as many bicep curls and tricep dips as you can muster and conquering the price of liposuction procedure for your arm?  The problem of  flabby arms is more common in women who have lost a lot of weight. If you were over weight, the skin of your arm has to stretch to accommodate the increased volume of your upper arm. After weight loss or liposuction arm, the skin usually fails to tighten and sags. Brachioplasty is performed to correct this problem of  loose hanging skin of your arms.There are some surgical options, too 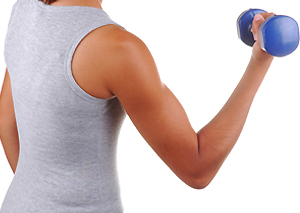 DITCH YOUR WINGS
For many women, being uncomfortable with upper arm area of the body is  annoying in sunny weather, when all around are slipping into tanks and sleeveless tee-shirts. It’s unclear why some women have flabby arms and others don’t – obviously exercise has a lot to do with it, but many believe that so does genetics. For a permanent solution to  arm-loathing problem, there are a couple of surgery options. Arm procedures are less talked about than other forms of surgery and the results are usually less dramatic than those you can expect to see elsewhere. Essentially the choice is between lipoplasty (or liposuction) to remove fat, or an ‘arm lift’ (brachioplasty) to get rid of excess skin. Both have their advantages and disadvantages.You should however not ignore the fact that surgery can be effective at reducing fat, it will never give your arms the tone and definition that’s so attractive when peeping out of sleeveless shirts. Only exercise will do this. That said, if your saggy arms are the result of ageing skin, or major weight loss, exercise can improve but not eliminate the problem. Plus the older you are, arguably the longer it’s going to take for you to see results from a regular arm workout. ARM LIFTSFor most women – especially those who don’t have masses of weight to lose – the arm lift (brachioplasty) is the best option. It tightens loose skin, and by stretching it, ‘irons out’ any rough or creepy patches. It can be done under either local or general anaesthetic, and bruising and swelling normally last for no more than a couple of weeks, although you will have to wear a bandage or special compression garment for several weeks. You can exercise again after six weeks. For those women who think skin tightening is not quite enough but don’t need to loose enough fat to warrant a full-blown lipoplasty procedure, small amounts of fat can sometimes be removed at the same time.

Arms can be one of the easiest places to tone, here’s how to get started.

Wear tank tops
Yes, tank tops. If you’re self-conscious about your upper arms and how they look, you probably steer clear of tank tops and sleeveless dresses. That’s not necessarily the best way to motivate yourself to shed that arm fat says Cat Smiley, professional skier, two-time Canadian Trainer of the Year, and both the brains and brawn behind Whistler-B.C. based Cat Smiley’s Fitness.

“A lot of women wait until they’re buffed up and tank top ready before they wear them,” Smiley says of her decision to make tank tops part of her Boot Camp uniform. “Some women spend a lot of time covering what they perceive to be faults, but in reality I think it [wearing a tank top] does inspire you to get on with it. I’ll start people with a tank top in the Boot Camp class and then I’ll see Sally from Seattle in town, wearing a tank top – it shows her body image is improving.”

Change your self-perception
If toning your flabby arms is part of an extensive overall weight loss program, you need to shift the way you think of the person in the mirror

“It’s not just about losing weight,” says Smiley. “We get married to the identity we see in the mirror and when we lose weight and tone up, you can really miss the perception of who you are. It can be isolating – the friends you used to go for ice cream with on Sunday might feel resentful if now you want to go for a walk instead.”

Get started with basic equipment
Whether you’re toning flabby arms or a more generally flabby body, Smiley recommends starting with four basic pieces of equipment:
• Stop watch
• Two 8-pound or 10-pound weights for bicep curls.
• Yoga mat
• Buy good running shoes – obviously these won’t be for your arms, but they will work into your overall fitness program.